For the past two years, Bertelli and Negri have worked to retrofit this nearly century-old house to bring it to “net-zero energy” status — meaning an environmentally sustainable dwelling that produces at least as much energy as it uses. Motivated by scientific consensus that the Earth’s temperature is reaching record-high levels because of climate change caused by human activity, the family has designed their home to drastically reduce their energy use. And they employ on-site solar energy production to offset what they do consume.

American homes devour energy, and most don’t produce any in return. Residential buildings account for more than 20 percent of the nation’s energy consumption, releasing an average of 8.7 tons of carbon dioxide per household every year — around 70 percent more than the average passenger car — according to data compiled by the U.S. Department of Energy. Temperature control, combined with appliances that heat water, chill our food and wash our clothes, account for a majority of that consumption. Meanwhile, the poorly insulated walls and thinly glazed windows that come standard in many American homes allow much of the controlled air to escape, requiring even more energy. 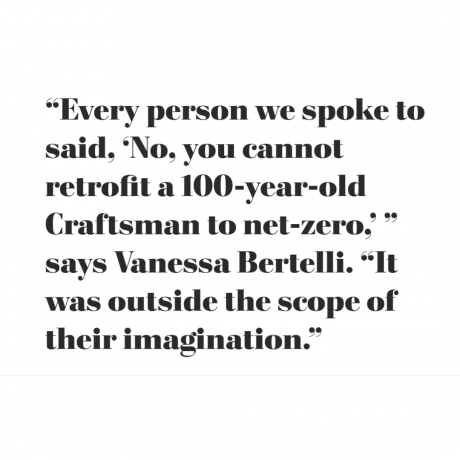 Bertelli and Negri have reinforced their walls and ceilings with thick insulation, sealed the house with an airtight layer, replaced appliances powered by fossil fuels with ones that run on electricity, and installed solar panels.