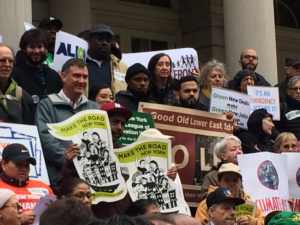 New York, NY, April 18, 2019 –   The New York City Council has passed Intro. 1253-C, with the explicit goal of reducing building carbon emissions rates 80% by 2050.  The bill is aimed at buildings with 25,000 SF of floor area and larger, which represent a majority of greenhouse gas emissions produced by buildings in NYC.

The bill, sponsored by Council Member Constantinides and co-sponsored by 30 other Council Members, sets out three steps to the 80% reduction – with the first reduction set for 2022, the second in 2030, and finally in 2050.  The bill is supported by Mayor De Blasio, and is expected to be signed into law.

While there has been much debate over the new risks to owners, such as proposed penalties for noncompliance, possible alternative pathways of compliance and the various building occupancy types, one thing is clear: that by utilizing the Passive House standard building owners can optimize their building’s carbon emissions and drastically reduce their potential risks.

Existing Buildings Should Plan for EnerPHit: While existing buildings foresee a struggle in hitting the proposed targets, step-by-step retrofit planning, with the Passive House EnerPHit standard, is a logical tool to achieve the bill’s goals. Using the Passive House EnerPHit standard, to make a 25 year plan of building upgrades to the enclosure and systems; coops, condominiums and the myriad of other large buildings can reliably meet compliance –  while simultaneously becoming healthier, more comfortable, more resilient, and more affordable.

New Buildings Should be Passive Houses: What’s less appreciated is that a new building, built tomorrow, must also comply with the 2050 goals. Therefore, to most effectively comply with the new goals – avoiding costly retrofits in the coming decades – new buildings should be Passive House buildings too. If a developer builds a Passive House building in 2020, there should be no reason for concern about risk of non-compliance in 2022, 2030 or 2050. Going forward, if building new, building a Passive House building will be the least risky path, as the low carbon emission profile is established in the design of the building, and consequently frees the owner from concern of alternative compliance mechanisms that may or may not be there in the future.

“… it is likely that the volatile weather patterns correlated with climate change will necessitate more fuel consumption as both cold snaps and heat waves become more common. That’s why it is especially important that this proposal contains Passive House standards. New York homes and offices will be much better equipped to handle erratic shifts in the temperature under this standard.”

All this and more will be discussed at the NAPHN19 Passive House Conference, June 27th and 28th, at the Metropolitan Pavilion, at 258 West 18th Street in New York City, with officials from New York City, New York State, California, British Columbia, the UK and many other regulatory jurisdictions.

The conference will dive into the technical details of large Passive House buildings, both residential and commercial, new build and retrofit – now of particular concern for New York City developers and property owners.

Workshops, Tours and a curated products Expo accompany the regular program, highlighting progress and projects by those already Building the World We Want.

The conference will dive into the technical details of large Passive House buildings, both residential and commercial, new build and retrofit – now of particular concern for New York City developers and property owners

Sign up as NYPH Member today and save big!