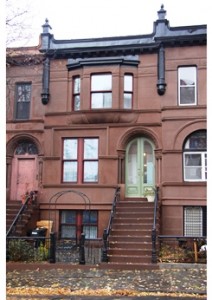 This Passive House retrofit in Park Slope, Brooklyn, certified under the EnerPHit retrofit standards, was designed to maintain the home’s existing turn of the century brownstone façade and its existing footprint. The renovated three and a half story house now includes multiple living spaces, four bedrooms and four bathrooms. While almost a complete gut renovation, the design was able to incorporate the installation of a continuous air barrier and the necessary insulation while working around the home’s existing staircase. Other historic elements such as doors and wood trims were removed, refurbished and reinstalled. The Passive House envelope also includes the cellar level, which was transformed into a playroom. Exterior decks were installed on the rear façade at the ground floor and parlor levels and there are two rooftop terraces. An extensive-type green roof was installed on the house’s primary roof level.
As a Passive House retrofit, the main emphasis was on creating a high-performance thermal enclosure. Front and back walls were framed out inside and filled with dense-packed cellulose with an Intello vapor-intelligent membrane (Pro Clima products) to hold it in place. The back wall has 4″ of EIFS (foam + stucco) as well, and the roof has 4″ of polyiso continuous over the top, with dense-packed cellulose and Intello at the framing below. The new cellar slab has 4″ of XPS below the concrete. Windows are Zola triple pane, with wood frames in the front façade and uPVC in the rear facade. The party walls were parge-coated with a high lime content mortar to fill the voids and then coated with Sto EmeraldCoat for a vapor-open but air-tight layer, completing the continuous air barrier. Final air tightness of 1.0 ach50 was achieved after extensive testing and leak fixing at various details, namely the joist pockets in the party walls.